We were honoured to have our Life Patron, Dame Judi Dench with us on Sunday 29th of May for a wonderful afternoon of anecdotes, tips and laughs in An Afternoon In Conversation With Dame Judi Dench. Interviewed by the fabulous actress Finty Williams, also Judi’s daughter, the pair loved their time on stage and in the drinks reception after the show where they were able to mingle and chat to some of the attendees on the night.

The reception of Judi and Finty by the audience was exceptional and they has the crowd in the palms of their hand the entire evening.  The pair discussed Judi’s life on and off stage including family holidays, meals, special performances, and even Judi’s long list of pets over the years!

Finty Williams said: “Theatre Royal and Owen Calvert-Lyons for giving Ma and I such a wonderful and joyous afternoon. We will never forget it.” 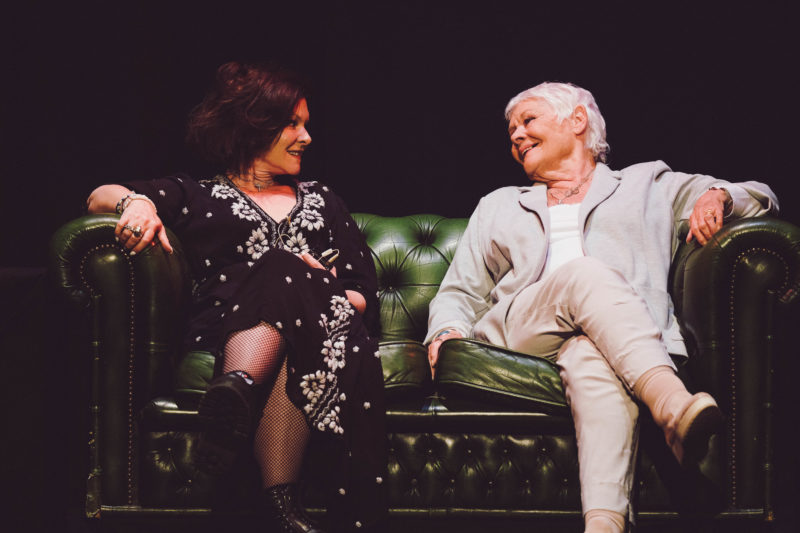 The Seven-time Olivier Award-winning actress, Dame Judi Dench, made her professional theatre debut as part of the Old Vic Company in 1957. Her Olivier Award wins for productions including A Little Night Music and Absolute Hell means that she currently holds the record for the most competitive Olivier Award wins by an actress. Recently, Dame Judi’s theatre credits include starring with Kenneth Branagh in The Winter’s Tale at the Garrick, The Vote at the Donmar Warehouse and Peter and Alice at the Noel Coward Theatre. Her notable film credits include M in the James Bond films, a role that she has played on nine separate films. Recent film credits include Belfast, Murder on the Orient Express, All is True with Kenneth Branagh, Red Joan and Six Minutes to Midnight.

This wonderful event was a fundraising event in aid of Theatre Royal to which Dame Judi Dench and Finty Williams kindly donated their time in order for us to be able to host this fantastic event.

Before the event, Judi said: “How lovely to be returning to Bury St Edmunds after such a long time. Its historic auditorium is a magical place and its rich heritage must be preserved for generations to come.”

We hope to have the pair back at the theatre very soon and we appreciate them for their continued support for Theatre Royal.