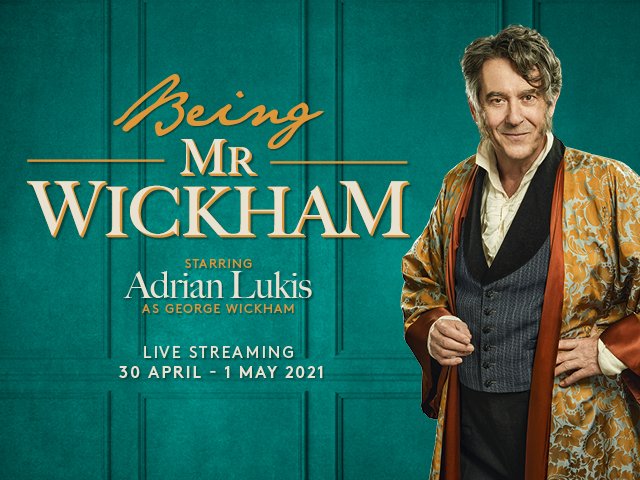 “Mr Wickham is blessed with such happy manners as may ensure his making friends – whether he may be equally capable of retaining them is less certain.“

Mr Wickham is ready to set the record straight.

Adrian Lukis, who starred in the renowned BBC TV adaptation of Pride and Prejudice, returns to the role of Mr Wickham this spring. Join Pride and Prejudice’s most roguish gentleman, George Wickham, on the eve of his sixtieth birthday, to lift the sheets on what exactly what happened thirty years on from where we left him…

Live from the stage of the magnificent Regency Theatre Royal Bury St Edmunds, discover his own version of some very famous literary events. What really happened with Darcy…? What did he feel about Lizzie…? What happened at Waterloo? Not to mention Byron…

These live performances will be followed by a Q&A with Adrian Lukis. We are thrilled to stream this production live over two days.

The award-winning Original Theatre have previously visited Theatre Royal with Birdsong, Three Men in a Boat and Invincible.  Since March 2020, Original have created Original Online which has streamed a number of award-winning productions to over 39,000 audiences worldwide.

THIS LIVE STREAM CAN BE WATCHED FROM ANYWHERE IN THE WORLD.

How to access the live stream: Once you have purchased tickets, the website link will be sent to you approx. 1 week before the streaming and you will simply need to log in with the email address and password you use to log into your Theatre Royal Bury St Edmunds account. The performance will be streamed directly to a special streaming site in partnership with Original Theatre Online. You will be able to watch on any laptop or tablet browser such as Chrome, Firefox, Internet Explorer, Safari or Opera. You can also watch on your mobile device: Chrome on Android, UC Browser on Android, Samsung Internet, iOS 8+ and Windows Phone 8+. To watch the show on a TV we advise using a HDMI cable to sync with your laptop or device. This will be a live performance and must be watched at the time of the event.

Live Stream Supporter £40. Available until 19 April. Includes digital programme which will be emailed to you by 30 April and your name (or a name of your choice) as a credit on the live stream.

Live Stream Premium £100. Available until 19 April.  Includes a script signed by Adrian Lukis which will be sent to your postal address, a digital programme which will be emailed to you by 30 April and your name (or a name of your choice) as a credit on the live stream.

There is a captioned version of the production on Saturday at 7.30pm.  If you would like your live stream to include captions please select the CAPTIONED ticket type.