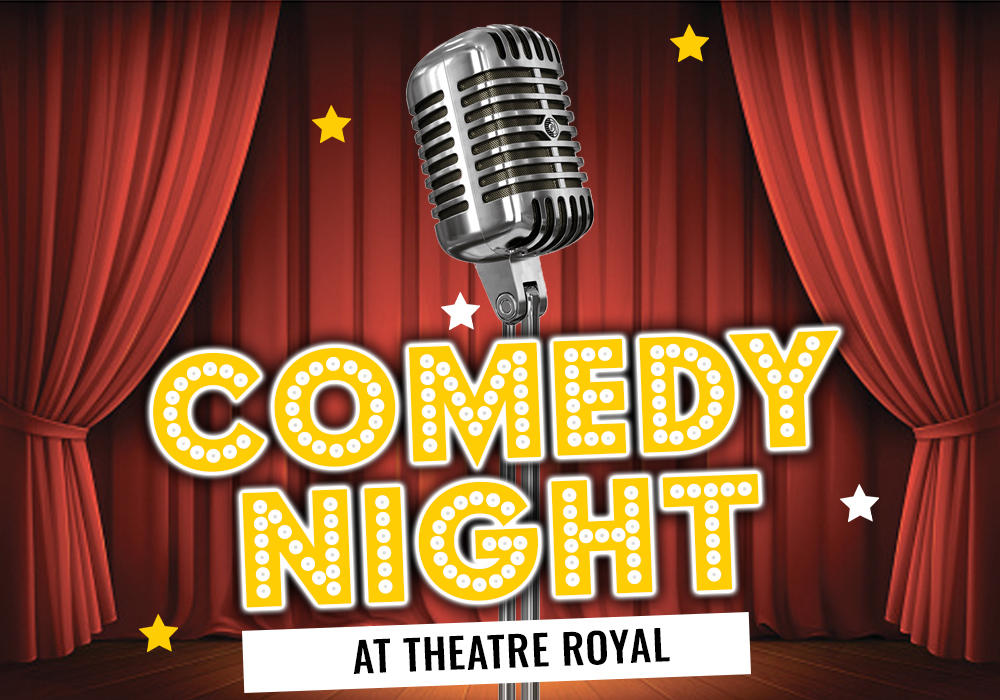 Come and enjoy an evening with 4 rising stars from the comedy circuit as Theatre Royal presents a Comedy Night in partnership with Kirsty Hudson of Comedy Market.

Please note, this event is advised for over 18s.

Alistair is one of the top headliners on the international comedy circuit. He has performed in over 40 countries including the legendary Comedy Cellar in New York. He is a regular at London’s world-famous Comedy Store and a core member of their weekly topical ‘Cutting Edge’ team.

He has made countless appearances at UK music festivals including Glastonbury, Latitude, Bestival and Green Man and taken several solo shows to The Edinburgh Festival. His latest show, ‘The InternationAL’ premiered at the 2018 Melbourne Festival and went on to Edinburgh where it received a highly coveted five star review from The Scotsman, before selling out its entire run at The 2019 New Zealand International Comedy Festival.

Goofy and peculiar, Stephanie Laing’s comedy is partway between the needy oddness of Maria Bamford and the upbeat affability of Josie Long. Her material is a mix of silliness, filth and unusual observations, underpinned by a disarming honesty which makes her seem charmingly vulnerable.

Stephanie started performing in April 2007 on the Scottish comedy circuit. She had shows at the Edinburgh Festival in 2014 and 2015, and has performed at The Stand, The Comedy Store, The Comedy Cafe, Crack Comedy, Downstairs at The King’s Head, Mirth Control, Hilarity Bites, Eminent Banter and XS Malarkey, among others. She was a finalist in the Leicester Mercury Comedian of the Year 2015.

Janet has been sharing her down to earth style of comedy in such far-flung, exotic places as Mile End, Salford and Southend on Sea.

“If Eastenders were like this, we’d all be watching it” – Mick Ferry

A legendary comedian, in that there is little historical evidence that he exists. But he does exist. Leicester Mercury Comedian of the Year 2017, Alasdair has appeared on the BBC’s Mock the Week, BBC Radio 4 Extra, and has performed stand-up at Glastonbury, the Edinburgh Fringe and several international comedy festivals. He knows quite a lot about 19th century magicians. Tourists often ask to have their photo taken with him, presumably impressed by this!

A conversational gag merchant, semi-pro stand-up for 10 years or so, closing, opening, and middling his way around the country with a mix of beautifully written gags and truish stories, together with some audience banter.  He confesses to have become increasingly grumpy meaning his  comedy focuses on (amongst other things) politeness, getting old and the joys of long term relationships.

Away from stand up. He recently rowed across the Atlantic, becoming a world record holder in the process, and lives on a farm in rural Leicestershire.