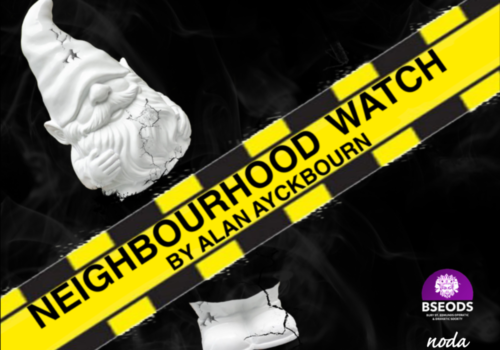 Brother and sister Martin and Hilda Massie live together, leading a quiet existence in the confines of the Bluebell Hill Development. Just as they are preparing for a housewarming gathering, their peace is shattered by a young trespasser in their garden. The Massies’ neighbours congregate in their living room and together they agree to form a neighbourhood watch group to safeguard against further incidents. But after the Massies’ beloved garden gnome Monty is thrown through their window, matters swiftly escalate, complicated by Martin’s burgeoning romance with Amy, wife of Gareth, who was formerly involved with Luther, husband of Magda… What begins as a well-intentioned scheme for a safer community ends in violence and acrimony.

First performed in 2011, Michael Billington from The Guardian called it “highly ambitious” and “biliously funny” and Charles Spencer of The Telegraph said “this timely and provocative play rivets attention throughout. There are some blissful comic moments and even that staple of Ayckbourn’s dramatic world, an ornamental garden gnome, has a crucial part to play.” Mark Shenton, The Stage said, “This…painfully funny and truthful play shows Ayckbourn in no danger of slowing down or having his age yet catch up with the number of plays he has written.“