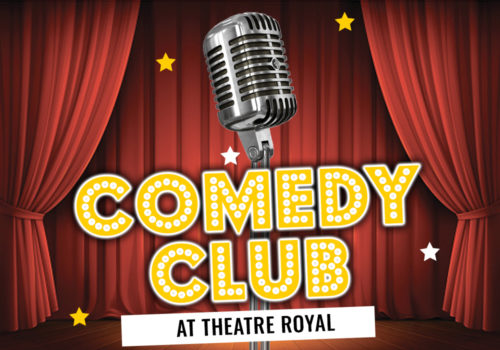 Fancy a laugh? Theatre Royal’s very own comedy club features a great line-up of comedians from across the UK touring circuit alongside up-and-coming comics.

The line-up for this evening will be announced soon!

Ex-pat Aussie Nick Elleray is a 3-time qualifier for the BBC New Comedy Award and is known for his “aridly dry delivery, savvy writing and quality downbeat comedy” (Chortle). He received acclaim for his 2019 Edinburgh Fringe show Big Nick Energy and is taking a new show, Passionate About Compromise to the Fringe in August 2022.

A self-proclaimed fake American, Bronwyn works in advertising by day and draws on her experiences of making ads that no one wants to watch to inspire her comedy. She was the Funny Women Runner-Up in 2021 and is a regular on the London circuit where she can be found biting the hand that feeds her.

Chris Norton Walker is an award-winning Comedian and one of the best one-liner acts on the circuit. Two-time UK Pun Championship Finalist (2020 & 2022) with his jokes being award-nominated and published. He has performed internationally in Europe and the USA and has been nominated for awards at major UK comedy festivals. He combines “genius audience interaction” (Jest Another Comedy) with “slick and well-crafted material” (Notts Comedy Review). Plus a raft of minor TV appearances on Dave, ITV, and BBC. There aren’t many who can combine a quick wit, a clever joke, and a huge personality in a set that would entertain in a comedy club, a corporate crowd and a kid’s show but Chris Norton Walker might just be that act.

“This guy could get massive” – Ed Byrne

Multi-award-winning comedian Tom Taylor has received high praise from audiences and critics alike. In 2013, Tom reached the final of the prestigious So You Think You’re Funny? competition, the following year he was a finalist in the Hobgoblin Comedy Award, and in 2015 he took home the award for Comedian of the Year at the inaugural Great Yorkshire Fringe. More recently he picked up the Audience Favourite Award at the Musical Comedy Awards 2017 and reached the final of English Comedian of the Year 2018.

A favourite of live bookers across the UK, Tom has also supported John Bishop, Jason Manford, and Arthur Smith on tour and performed on Radio 2 and Radio 4 as part of the BBC Radio New Comedy Award. Tom’s debut Edinburgh show, Tom Taylor is the Indie Feel-Good Hit of the Summer, was one of The Telegraph’s must-see shows of 2019 and was described by The Scotsman as “a genuine joy“.

In addition to his stand-up talents, Tom is an accomplished actor and writer having penned and performed two one-man murder mysteries, A Charlie Montaque Mystery: The Game’s a Foot, Try the Fish, and The Man with the Twisted Hip. Following two sell-out runs at the Edinburgh Fringe Festival, Tom embarked on a national tour of both shows in autumn 2017. In 2020, Tom also devised, produced, and hosted The Isolation Song Contest, an alternative Eurovision, which featured David Walliams, Mel Giedroyc, Graham Norton, Clare Balding, and Sir Cliff Richard, raised over £38,000 for charity, and won a Chortle Award for lockdown entertainment.