To respond to the threat of the Omicron COVID-19 variant, you must wear face coverings in the theatre unless exempt.
Thank you for your co-operation.
Enjoy the show!

Walking Stories is a brand-new project from Theatre Royal Bury St Edmunds, which invited local people to tell the hidden stories of the place where they live.

We are delighted to share these stories with you.
The stories are written by local people, voiced by professional actors, with original music and sound design by composer, David Lewington.

Simply download the audio file onto a suitable device (smart phone, tablet or mp3 player) in a location with good WiFi.
Each story has a beautifully illustrated map to accompany it which you can either print off at home or view on your device as you walk.
Three of the Bury St Edmunds walks are all on one map so you may like to walk these during one visit.
Don’t forget your headphones! We recommend the over-head type rather than in ear-for a full experience and to reduce external noise.

Please Note: Walking Stories are highly immersive experiences but remember that cars and gravity are both real; take extra care on roads and crossings! 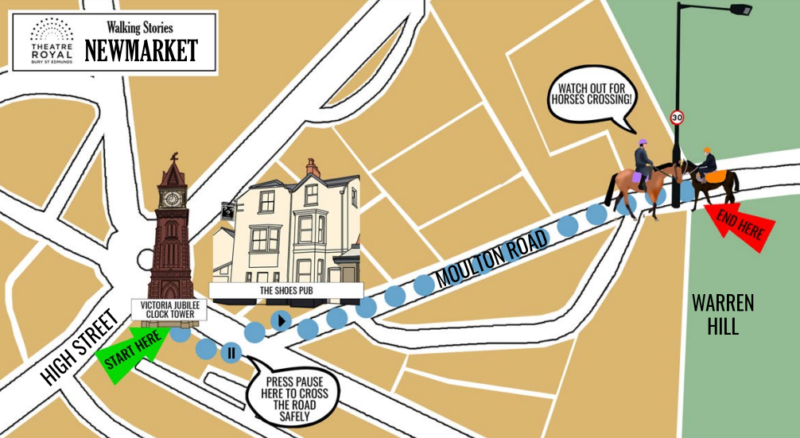 Join Fred as he weaves us through the streets of Newmarket and takes us to the races! Watch out for the horses crossing.

Terry Molloy is a prolific British actor who has worked continuously on Radio, TV, Film, and Stage, over the past 50+ years. Terry is perhaps best known as Mike Tucker in The Archers and Davros, Creator of The Daleks, in Doctor Who. 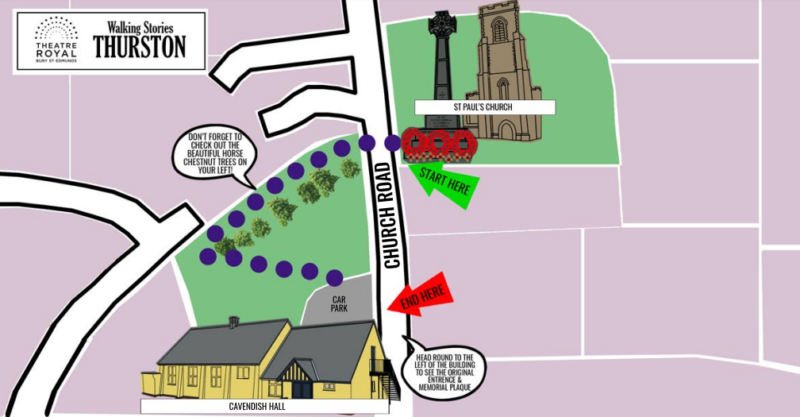 Cavendish Hall was meant to be a home. And to some of the people in Thurston, it is. Though back before it was given to the village, it belonged to Mary Cavendish and her husband. Her husband who took a trip aboard the Titanic…

Penelope has over 20 years experience as a voice artist/actress in all genres. Nominated by Audible for Narrator of the Year, Penelope has voiced over 200 audiobooks. Favourite titles include: Gorillas in the Mist, The Turn of the Screw, Hattie B Magical Vet children’s series and The Red Queen by Philippa Gregory. 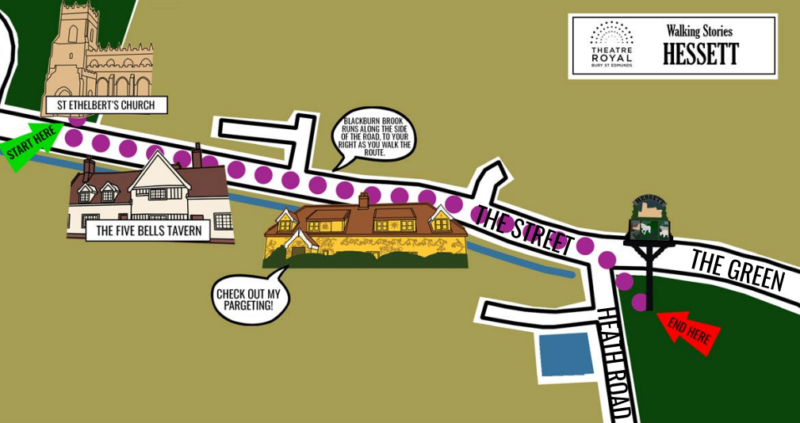 Here she sat on the bench every day, just hoping he would notice her. Just two people exchanging glances that lead to the love of a lifetime. 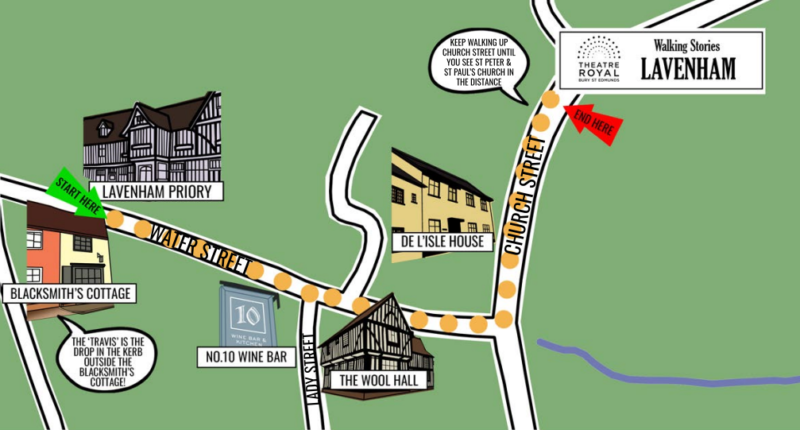 Our memories are most connected to senses. That’s how a smell or a certain sound can take you back to some of your fondest memories. So, let us take you back in time with the smells and bells of Lavenham. 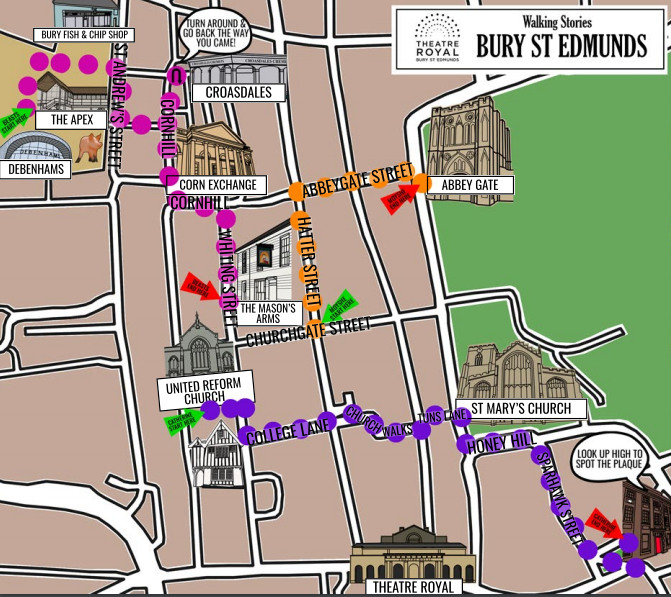 Do you remember when the Cattle Market used to be an actual cattle market? Life may have seemed a little simpler back then, but falling in love was just as complicated.

Rebecca appeared in Long Distance Affair for Pop-up Theatrics (NYC) and Juggerknot (Miami), and wrote The Kindness of Strangers. She has multi-roled in Much Ado About Nothing and played the Duke of York in Richard II. Rebecca performed her own critically acclaimed play, Sometimes I Laugh Like My Sister at the Edinburgh Fringe, throughout the UK, South Africa and Europe.

All Moyshe Pepperman wanted was to live a simple life in Bury St Edmunds. Being Jewish made that difficult. Being Jewish during the Crusading Riots of 1189 made it impossible.

Ben Addis is a Welsh actor from Blaenafon. After training at Bristol Old Vic Theatre School he appeared in London’s West End, at the Royal National Theatre and with the Royal Shakespeare Company. He has worked extensively across the mediums of Film, Radio & TV as well as voicing many Audiobooks and Guides – most recently for the Queen’s Gallery at Buckingham Palace.

He was the man that helped abolish the slave trade. She was the woman who stood by his side. Together, they changed the world.

Rosanna trained at Bristol Old Vic Theatre School. She has featured in many audio dramas including playing Dracula; Riversong and The Cat of Bubastes. She can also be heard regularly playing a plethora of characters across time and space in Doctor Who. 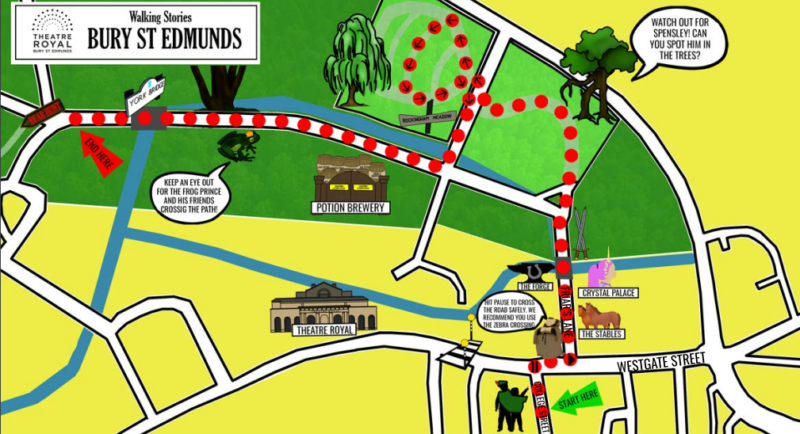 Journey through the forests, jungles and lakes of Bury St Edmunds. Can you help the Prince return home to his Princess? Don’t forget your swords! You’re going to need them for the family-friendly adventure ahead…